Homework 1 is a chance to get some experience implementing discrete dynamical systems techniques in a way that is parallelized, and a time to understand the fundamental behavior of the bottleneck algorithms in scientific computing.

Please email the results to crackauc@mit.edu titled "Homework 1: (Your Name)".

Problem 1: A Ton of New Facts on Newton

For these problems, assume that $\frac{dg}{dx}$ is non-singular.

Take a look at the Quasi-Newton approximation:

for some fixed $x_0$. Derive the stability of the Quasi-Newton approximation in the form of a matrix whose eigenvalues need to be constrained. Use this to argue that if $x_0$ is sufficiently close to $x^\ast$ then the steady state is a stable (attracting) steady state.

Relaxed Quasi-Newton is the method:

Argue that for some sufficiently small $\alpha$ that the Quasi-Newton iterations will be stable if the eigenvalues of $(\left(\frac{dg}{dx}(x_0)\right)^{-1} g(x_n))^\prime$ are all positive for every $x$.

(Technically, these assumptions can be greatly relaxed, but weird cases arise. When $x \in \mathbb{C}$, this holds except on some set of Lebesgue measure zero. Feel free to explore this.)

Problem 2: The Root of all Problems

In this problem we will practice writing fast and type-generic Julia code by producing an algorithm that will compute the quantile of any probability distribution.

Many problems can be interpreted as a rootfinding problem. For example, let's take a look at a problem in statistics. Let $X$ be a random variable with a cumulative distribution function (CDF) of $cdf(x)$. Recall that the CDF is a monotonically increasing function in $[0,1]$ which is the total probability of $X < x$. The $y$th quantile of $X$ is the value $x$ at with $X$ has a y% chance of being less than $x$. Interpret the problem of computing an arbitrary quantile $y$ as a rootfinding problem, and use Newton's method to write an algorithm for computing $x$.

(Hint: Have a keyword argument for $x_0$, and let its default be the mean or median of the distribution.)

In this problem we will write code for efficient generation of the bifurcation diagram of the logistic equation.

The logistic equation is the dynamical system given by the update relation:

where $r$ is some parameter. Write a function which iterates the equation from $x_0 = 0.25$ enough times to be sufficiently close to its long-term behavior (400 iterations) and samples 150 points from the steady state attractor (i.e. output iterations 401:550) as a function of $r$, and mutates some vector as a solution, i.e. calc_attractor!(out,f,p,num_attract=150;warmup=400).

The bifurcation plot shows how a steady state changes as a parameter changes. Compute the long-term result of the logistic equation at the values of r = 2.9:0.001:4, and plot the steady state values for each $r$ as an r x steady_attractor scatter plot. You should get a very bizarrely awesome picture, the bifurcation graph of the logistic equation. 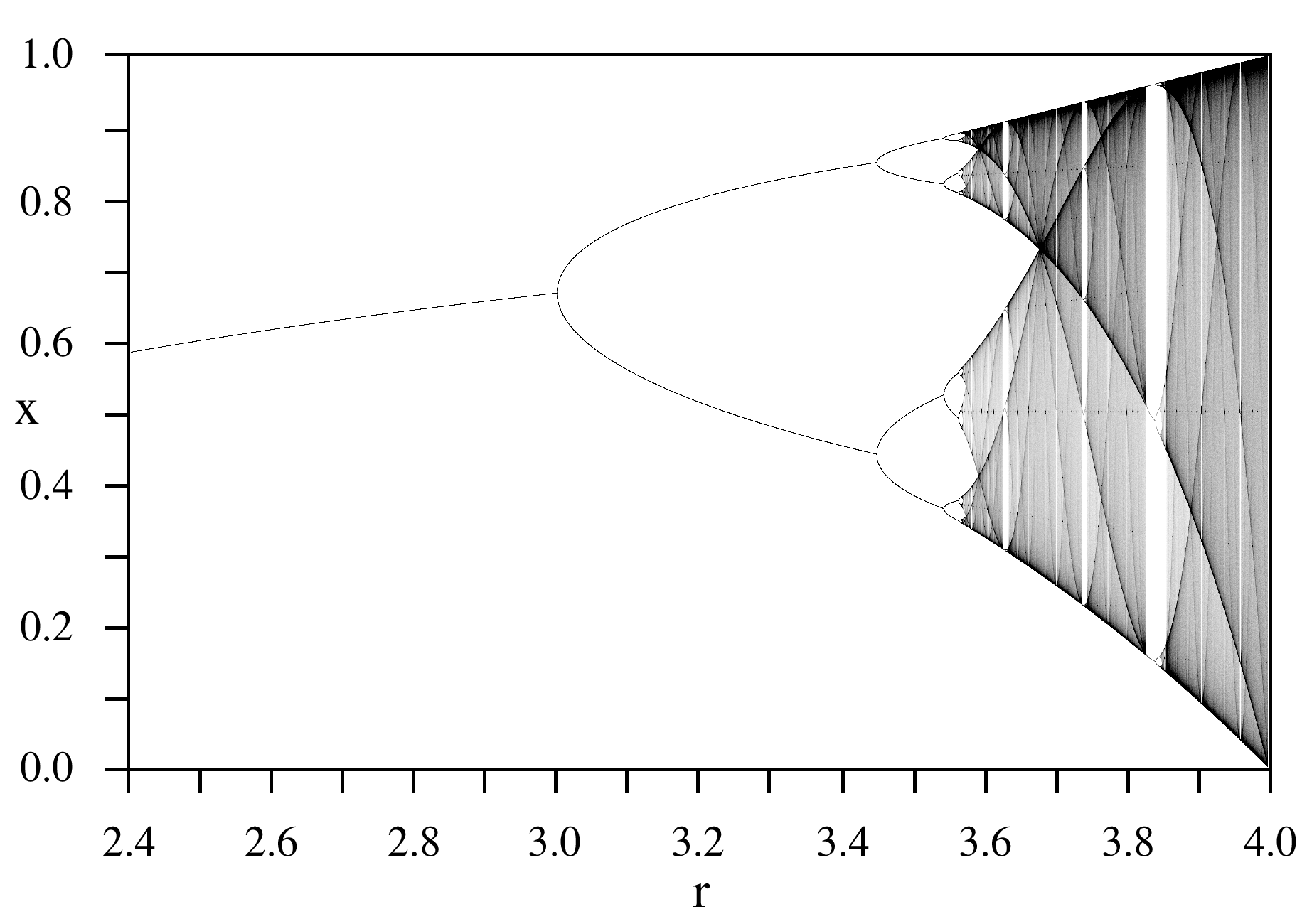 Multithread your bifurcation graph generator by performing different steady state calcuations on different threads. Does your timing improve? Why? Be careful and check to make sure you have more than 1 thread!

Multiprocess your bifurcation graph generator first by using pmap, and then by using @distributed. Does your timing improve? Why? Be careful to add processes before doing the distributed call.

(Note: You may need to change your implementation around to be allocating differently in order for it to be compatible with multiprocessing!)

Which method is the fastest? Why?